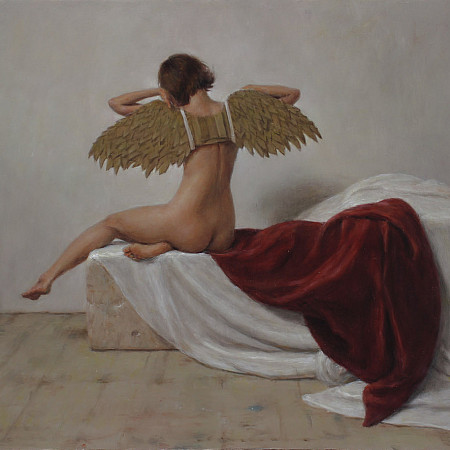 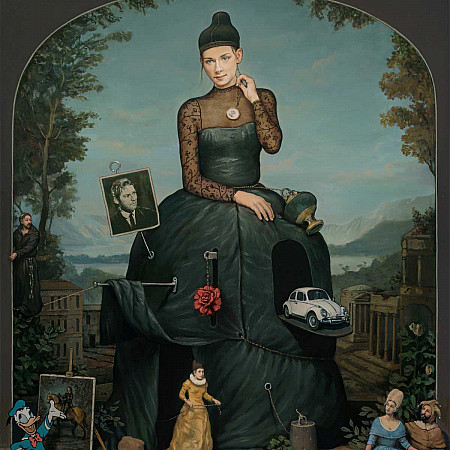 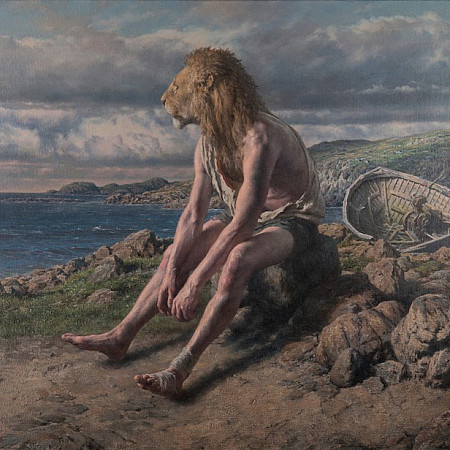 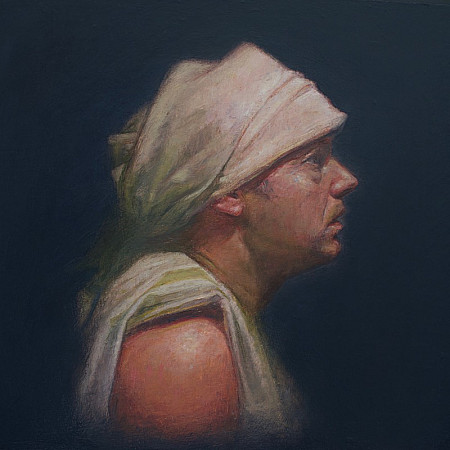 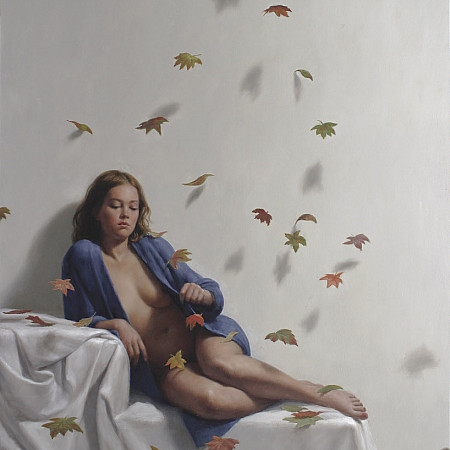 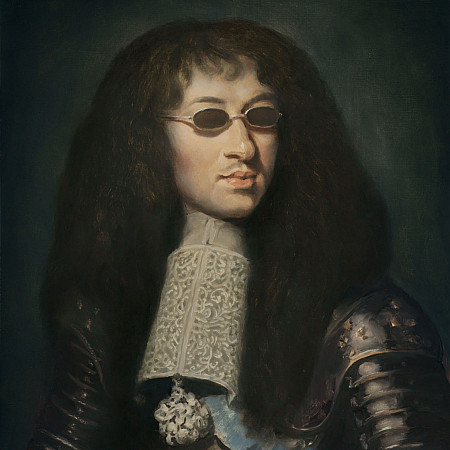 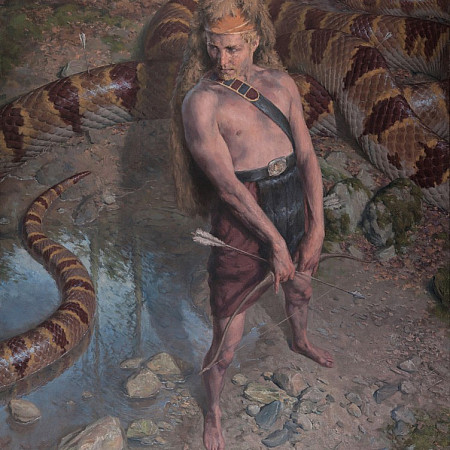 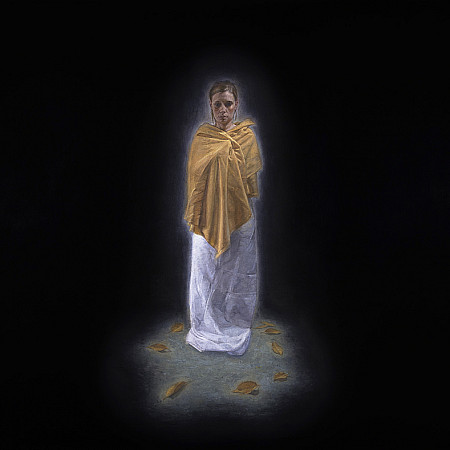 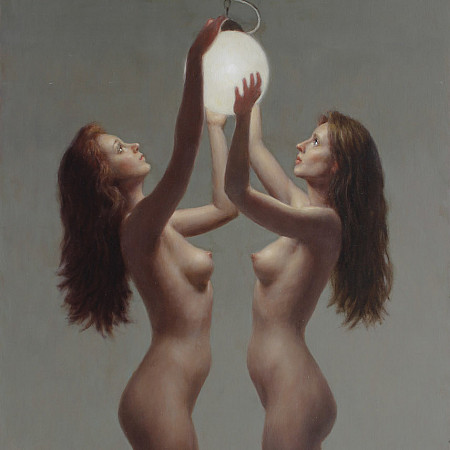 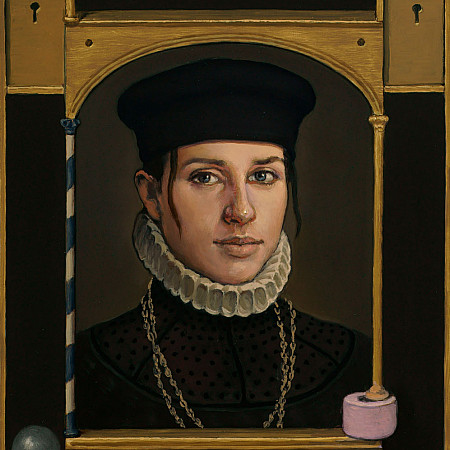 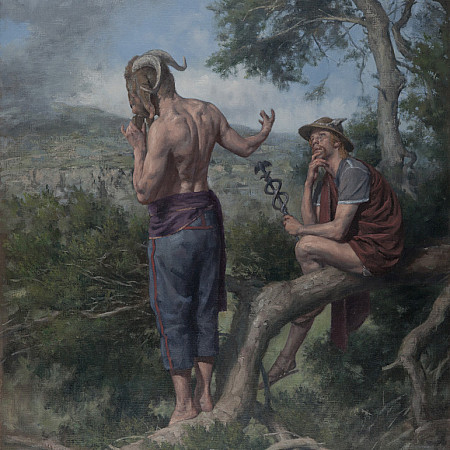 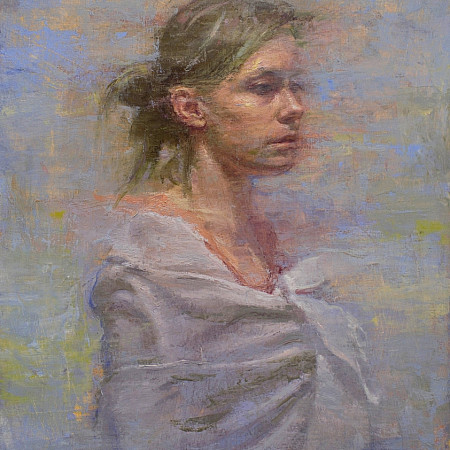 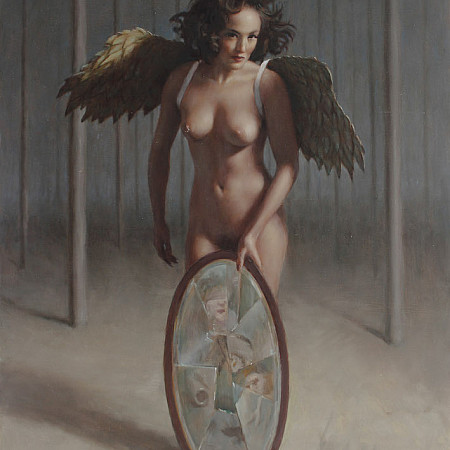 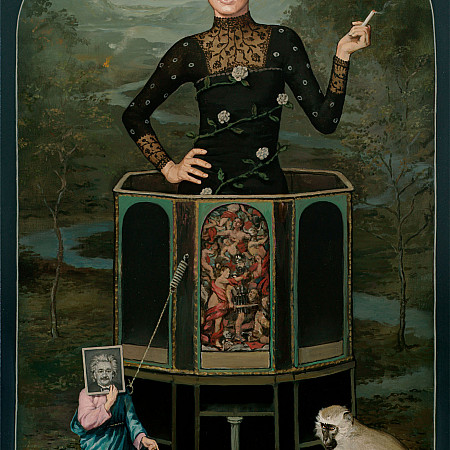 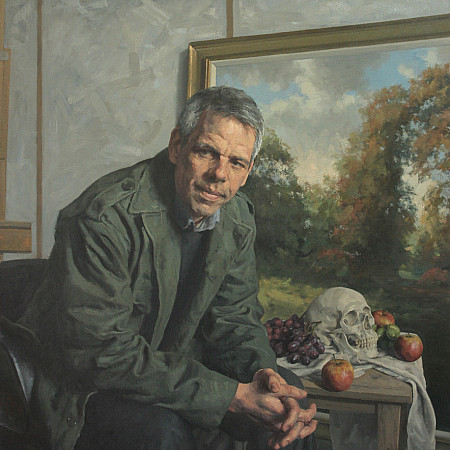 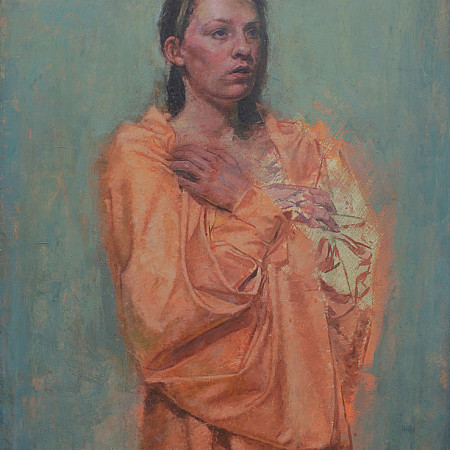 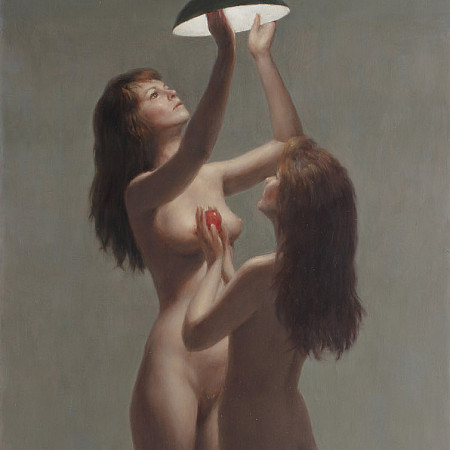 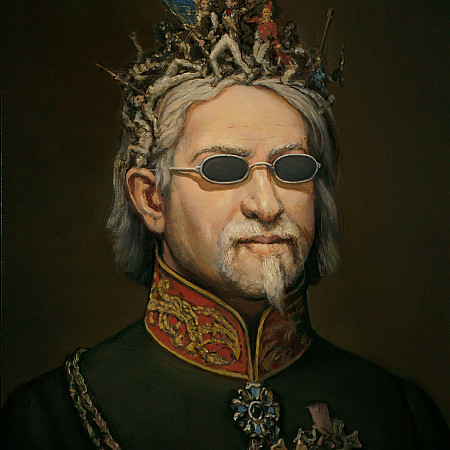 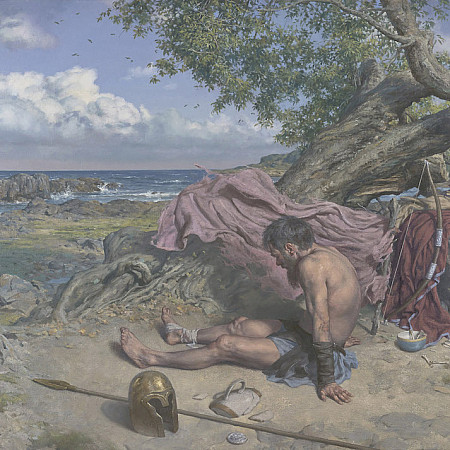 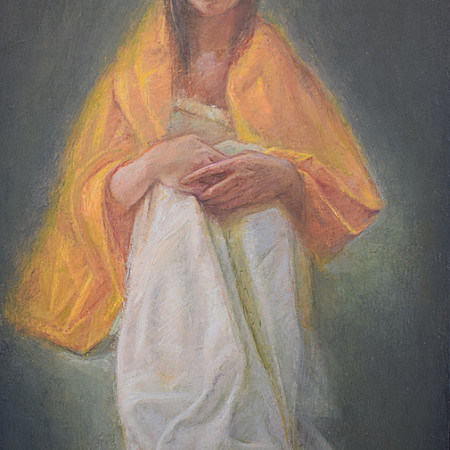 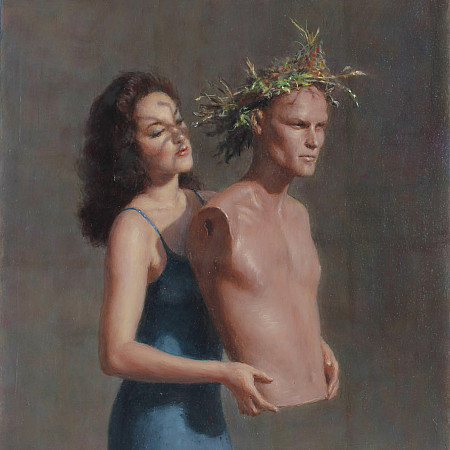 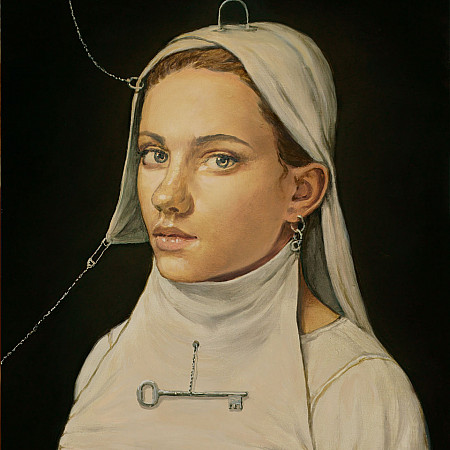 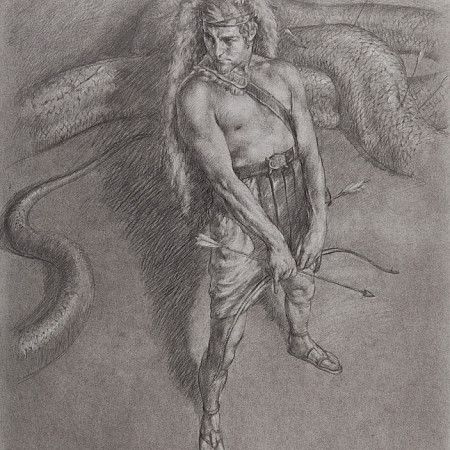 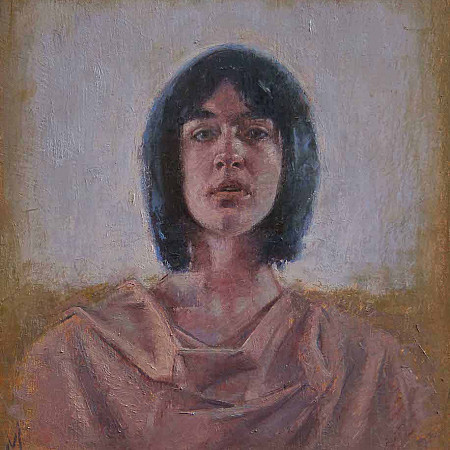 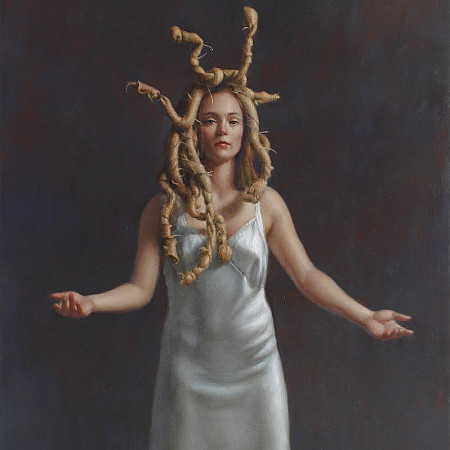 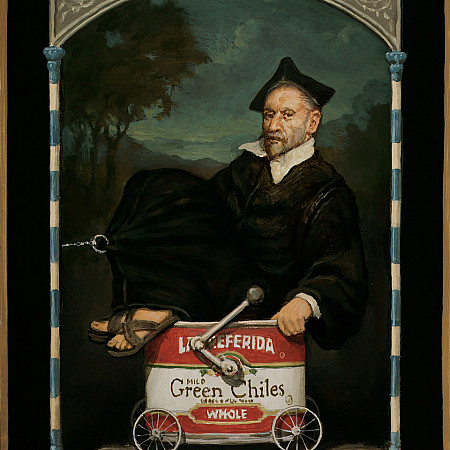 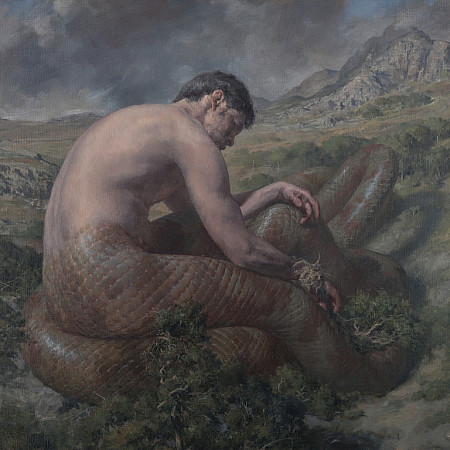 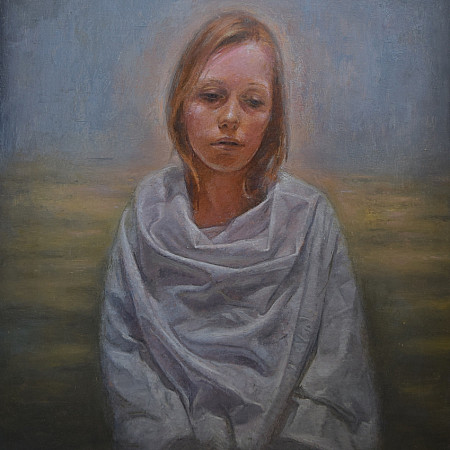 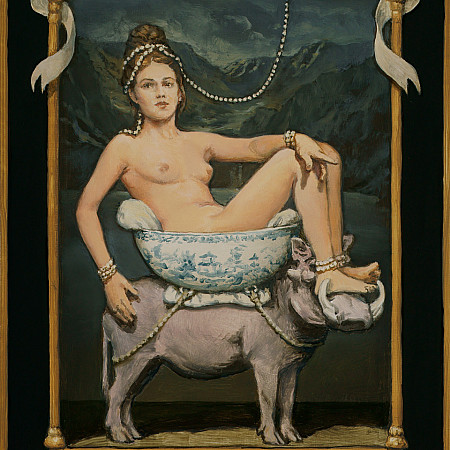 Our next small group exhibition features four outstanding figurative artists who lace their work with intriguing narrative. Imaginative and thought provoking, each artists work is immediately recognisable with their own very distinctive style.

Harry Holland is widely regarded as one of Britain’s leading figurative artists. Born in Glasgow in 1941, he trained at St Martin’s School of Art in London and has been living and working in Cardiff since the early 70’s.

The technical rigour he applies to his drawing and painting allows his often whimsical compositions a plausible reality. Exquisitely painted figures provide a satisfying aesthetic whilst ones imagination is rewarded as the often intriguing narratives play out.

Harry’s work has been exhibited in numerous solo shows across the UK, Europe and in the USA. His work is widely collected and is held in a number of Public collections including Tate Gallery, London, Metropolitan Museum of Art, New York and the British Museum in London among many others.

Alan Macdonald was born and grew up in Malawi. A childhood spent without television might seem a mundane prospect for children today but it meant that playtime was always inventive and more often than not in Alan’s case, creative. A move to Scotland led to study at Duncan of Jordanstone College of Art & Design (“DJCAD”) in Dundee graduating in 1984 followed by a Post Diploma in Fine Art at Cyprus College of Art. A period living and working in London followed before returning to Scotland in 2003 where he works now from his studio in Carnoustie.

The playful creativity that evolved from his childhood in Malawi is much in evidence in Alan’s work today. Strong figurative compositions with narratives infused with influences from art history are peppered with references to the contemporary pop culture of today. The work can be serious and intellectually stimulating but at the same time surprising and humorous. His canvasses are playgrounds for his imagination to roam free…an artist equipped with great technical skills who clearly enjoys the empowerment of trusting the more playful side of his ego.

Paul Reid, also studied at DJCAD in Dundee, from 1994-1998. Choosing to paint figuratively, at a time when conceptual art was more the norm, Paul was drawn to the classics as a source for narrative inspiration thereby narrowing his furrow further. Perseverance was rewarded with an incredible interpretation of Death of Actaeon for his Degree Show which secured him a First Class Honours. Invited twice in 2004 & 2009 to accompany HRH Prince Charles on official visits to Italy, Turkey, Jordan and Canada allowed him to exercise his skills as a landscape artist. Although forming the background in his narrative paintings, the landscapes are every bit as meticulous as the figures and still lifes of the foreground. By staging his reinterpretation of classical myths and legends in contemporary Scottish landscapes complete with modern day clobber, Paul’s compositions are much more than an illustrative interpretation of mythical literature. Highly accomplished drawing and painting underpins Paul’s exploration of Greco-Roman mythology and represent it through his unique and contemporary imagination.

Another student of DJCAD in Dundee, Robert Macmillan graduated in 1997. The figures in Robert’s paintings exude a luminosity that creates a strange ethereal quality creating a mysterious, timeless, narrative. Unlike the other artists in this group Robert’s figures fill voids of empty spaces which accentuates the luminosity of the central figure. Influenced by great painters of the past, Robert employs a continual process of layering, scraping and glazing which results in richly textured surfaces similar to that in Rembrandt’s portraits.

All four artists exhibit in the top galleries across the UK and abroad and are widely collected with work being held in both private and public collections. It is a real treat to be able to welcome them here to exhibit in East Lothian.