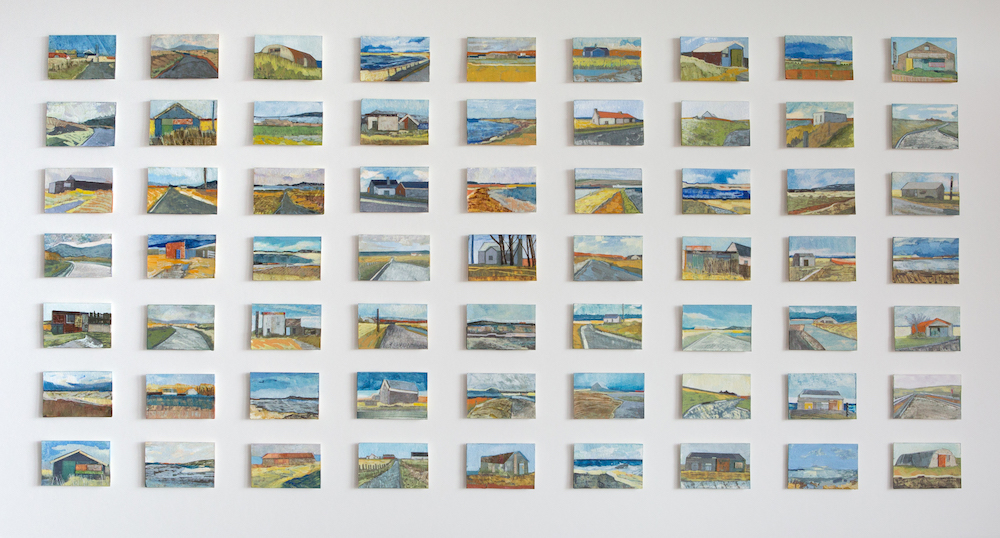 “These works are rich with nostalgia, not least in the palette of colours associated with old print – colourised, over-processed and faded by passing decades. Bleached, earthy tones are
streaked with flashes of cadmium red and intense, saturated blues. But this is something more nuanced than a straightforward longing for a simpler age”
Author Jane Alexander 2016

I document the world around me in paint. I think of myself as an explorer.

I don’t always restrict myself to working on a conventional two dimensional canvas surface. Sometimes I will utilise found objects such as old tins and matchboxes. I like to use objects in painting because they have a history, they have been on a journey, they bare the marks of time. They also have a practical purpose as framing devices and containers in which I can assemble miniature painted worlds. Transforming an everyday object into something magical.

I like to work in layers of acrylic and varnish. I often incorporate elements of collage, torn or cut fragments taken from photocopies of personal digital photographs which are embedded in the paint and worked over and manipulated. These fragments are often completely destroyed or obscured by the end of the painting process.

The medium of painting affords the opportunity to add something more than a photograph can provide, such as a heightened sense of place, an atmosphere or insight. A photograph captures a fleeting moment it takes a second to press the button, a painting takes days, weeks, months, years to complete. Painting can express profound insights denied by photography or the digital image.

My most recent series of paintings explore shopfronts and the changing face of the high street. These paintings have sense of nostalgia about them, a theme that I am not afraid to explore in my work. The colours that I have selected to use in this series purposely reflect the past. These are places which are clinging on and barely surviving, they are tired and worn, fading fast, testimonies to austerity, rapidly becoming extinct as the age of online shopping takes hold.