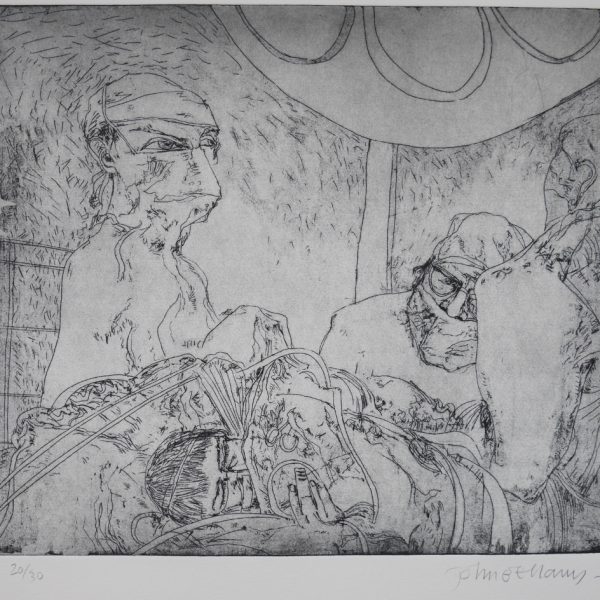 In the 1960’s John Bellany’s highly charged expressions of personal iconography, with the sea as its almost constant backdrop, established him as an artist who was striving to express universal themes from a Scottish perspective. Examples of such work include The Obsession (1966) and Time and the Raven (1982), which inspired a piece by composer Sir Peter Maxwell Davies. Bellany's portrait of Maxwell Davies hangs in the National Portrait Gallery in London and a portrait of the actor Sean Connery can be seen in the National Gallery for Scotland.

The underlying themes of his painting have remained consistent throughout his life. From his earliest work he has portrayed the environment of his youth using potent images of fishermen, the sea and the myths and characters populating the tight-knit fishing communities of Scotland. His Calvinistic upbringing instilled a reverence for religious belief that is apparent in compositions exploring mortality and the nature of good and evil. Bellany survived a liver transplant operation in 1988 that became necessary as a consequence of years of self destructive behaviour. Subsequent work reveals a renewed zest and vitality that celebrates a spiritual, physical and artistic rebirth in vibrant watercolours, bright canvases and lyrical etchings and drawings.

Bellany's work has been the subject of numerous awards and major international exhibitions in Boston, Dublin, New York and Warsaw. He was honoured with the first one-man show ever to be held at the National Portrait Gallery in London (1986), centred around a portrait of the cricketer Ian Botham, which was commissioned by the gallery. Bellany was awarded a CBE (1994) and holds honorary degrees from the Universities of Edinburgh (1996) and Heriot-Watt (1998). He was elected RA in 1991 (ARA 1986), Honorary Member of the Royal Scottish Academy in 1986, and in 1998 was made a Senior Fellow of the Royal College of Art, London.