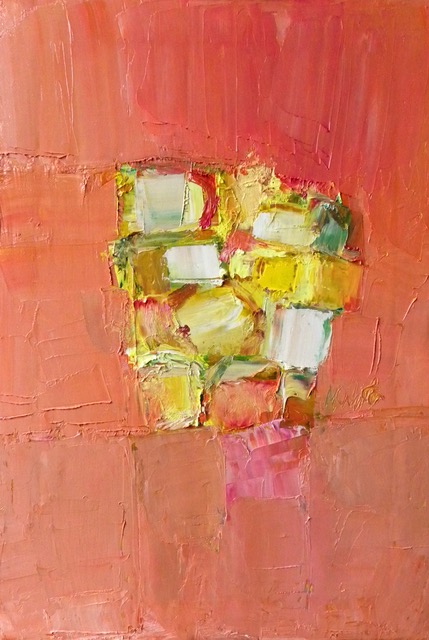 Alison McWhirter  BA MA was born in Scotland in 1975.

McWhirter attended Bath Academy where she trained as a painter gaining a BA in Fine Art in 1998.

She continued her studies to gain a Postgraduate MA in Visual Culture 2000.

Bath Academy of Art has produced such luminaries as the colourist Howard Hodgkin.

After establishing a career in publishing, as well as teaching art, McWhirter returned to South West Scotland to pursue her career as a painter; her raison d’etre.

McWhirter has had work selected by the Royal Glasgow Institute of the Fine Arts.

McWhirter’s studies of flowers are intimate compositions which evoke a mood through their vibrancy of colour and loose bold brushwork. Her paintings are instinctive responses to her subject, often mixing paint directly on the canvas, so creating a sense of spontaneity which is prevalent in all her work. McWhirter’s abstract works are sensorial responses to places which hover in the minds eye, they seem to create a visual order all of their own.

McWhirter has had exposure in The Scotland on Sunday in 2011 where she was described as ‘The new Scottish Colourist’. In 2012 Homes and Interiors Magazine deemed her to be one of the top Contemporary Scottish Colourists making waves in the art world.

McWhirter’s instantly recognisable work is held in private collections throughout the UK.

McWhirter has shown internationally in 2014 and 2015 at New York Art Fair and Hong Kong Art Fair selling out in NYC.

Her first solo London show in 2016 at The Russell Gallery was a major success.

"There are certain artists whose paintings are so exquisite in their colouring, so technically innovative and so compositionally daring that it is impossible to resist their immediate visual allure.  Alison McWhirter belongs unequivocally to this rare category." Dr Colin Bailey 2017

"Alison’s instinctive use of and placing of paint and colour makes her one of the most gifted artists I have known." Sarah Russell-Waling,  Gallery Owner

"Her unerring command of colour and unique ability to create novel combinations are nothing short of sensational; they continually amaze me." Collector