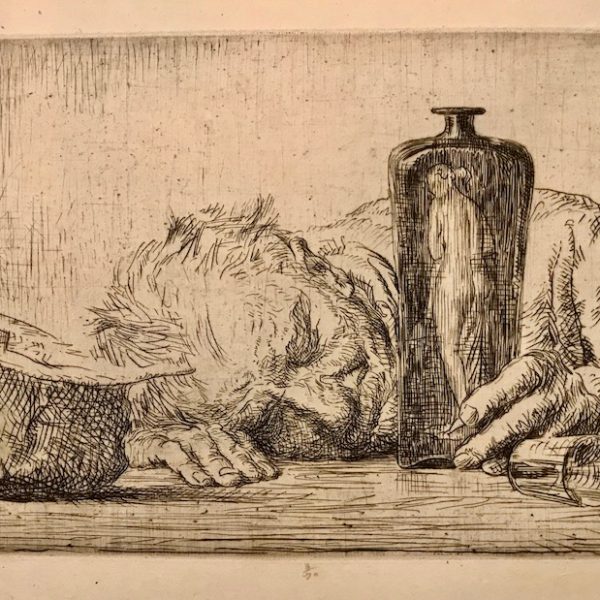 Additional Information
Signed and dated in the plate 1928. Signed, editioned and titled in pencil. Framed and behind glass.

Born in Aberdeen in 1890, Souter attended Gray's School of Art, Aberdeen and also, through the award of a scholarship, at The Alan Fraser School of Art, Hospitalfield, Arbroath. In 1912, on the recommendation of Sir George Clausen, he was awarded the Byrne Travelling scholarship to Europe. The scholarship took him to Madrid where he studied the works of the great Spanish Masters at the Prado. Fellow Aberdeen artist and etcher, James McBey was also in Madrid around this time. Souter later visited Italy, France, Belgium and Holland.

He returned to Aberdeen in 1914 and exhibited at the RA for the first time later in that year. He would continue to show there most years until 1952. During WW1 he served in the Royal Army Medical Corps. Shortly after the end of the war he married Christian and moved to London. He exhibited paintings and etchings at The Redfern Gallery, The Fine Art Society, Royal Scottish Academy and the Royal Academy where his most well known painting “The Breakdown” was shown in 1926. This painting featured a nude white girl dancing beside a black musician. The work, destroyed and later repainted in 1962, was withdrawn from the RA at the request of the Colonial Secretary.

In 1927 he returned to Spain with his wife, Christian where he carried out a number of drawings intended for use as etchings. We have two of these drawings, the Convent of San Benito Alcantara and the interior of the cathedral at Plasencia. Souter’s etching, “Episcopal Storks” appears to be of the bell tower of Plasencia Cathedral.

During WWII Souter worked as an interpreter in the Post Office Censorship Department during the day and as an Air Raid warden at night.

Portraiture was a good source of income and amongst his more famous sitters were Ivor Novello and Fay Compton. Portraits by Souter hang in the University of Aberdeen, the Royal Observatory, the Royal Navy School, the Royal College of Music and All Souls College, Oxford.
Souter returned to Aberdeen in 1952 where he continued to work until his death in 1972.

“Souter’s figure subjects and portraits have at times a monumental and classic beauty combined with great refinement. An “Aberdeen Minister”, “Pheasant Plucker” and “Chloe” are among the best of their kind in the British School. Others illustrated in Fine Prints are “Nirvana”, “Girl with Braided Hair”, “A Dish for Herodias” and “A Lady Making Lace”. Altogether the titles of twenty seven etchings and drypoints are mentioned in Fine Prints, and Laver who names another three. Souter is certainly an etcher who needs to be recorded more fully.”
Kenneth M Guichard – British Etchers 1850-1940