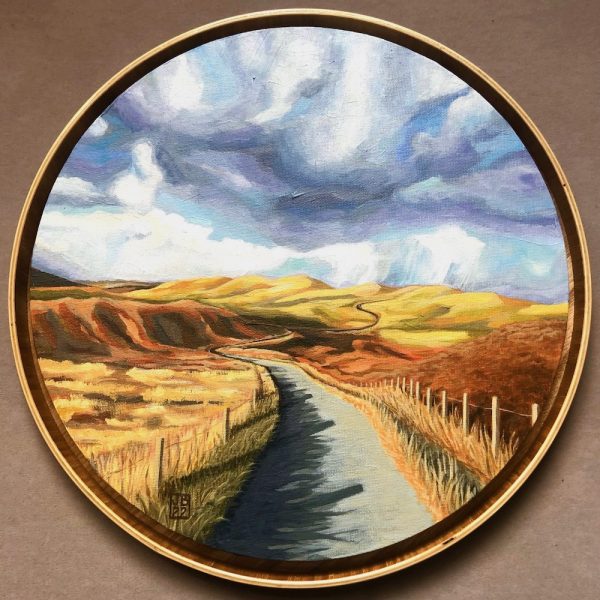 Jilly Ballantyne BA (Hons) is a contemporary painter. Born in Aberdeenshire, Scotland in 1967, she grew up in Fife and had the benefit of a great art department at Bell Baxter High School, subsequently she graduated from Gray's School of Art, Aberdeen in 1989.

A few years later, she moved to the Cote d'Azur, where she painted and taught art, hosting summer painting holidays in Henri Matisse's former villa in Vence. It was at Matisse’s Villa Le Rêve that the artist first became interested in painting chairs, Matisse had a fine collection of objects and furniture for his still lifes, including his famous, red striped 'Fauteuil Bergère,’ now an exhibit in the modern art gallery in Nice.

”I was fortunate to be the Artist in Residence, over three consecutive winters when Matisse’s house was closed to the public, painting in Matisse’s former studios. Alone and surrounded by those silent rooms, I was able to reflect on the life he must have led there, looking out at the palms from half-shuttered windows, just as he had from 1943 to 1949. It made a big impression.”

“Whilst at Le Rêve I also took part in the ‘Modern Masters, Matisse,’ a BBC tv series presented by Alistair Sooke.”

After 18 years in the South of France, seeking change and cooler climes, she moved to Cornwall, working from a new studio in Truro, producing still life, interiors and ‘roomscapes,’ - These are almost portraits, containing clues to the person who inhabits that space.

“The clarity and confidence of Jilly’s work is both energising and soothing. Her style, though graphic in origin, has a depth and thoughtfulness, very uplifting. Rich colour and bright light is clearly influenced by the South of France and Cornwall. The artist makes good use of patterns, strong composition, and a chalk line, perhaps from a love of drawing on her mother’s classroom blackboard, after school when she was a child.”

Whilst some artists choose to express their inner turmoil, Jilly aims to create serenity on canvas, a peaceful place that we would all like to inhabit.

During the Pandemic of 2020, Jilly was drawn to return home to Scotland, after almost three decades elsewhere. She chose the East Neuk of Fife, a creative coastal community, on the Firth of Forth, with its picturesque working

harbours. Here, feeling instantly very at home, Jilly has fulfilled a life long dream of living and working a stone’s throw from the sea. Being by the sea links all of the artist’s previous homes, but perhaps this new daily proximity to the water and a sense of home has already begun to influence her recent work.