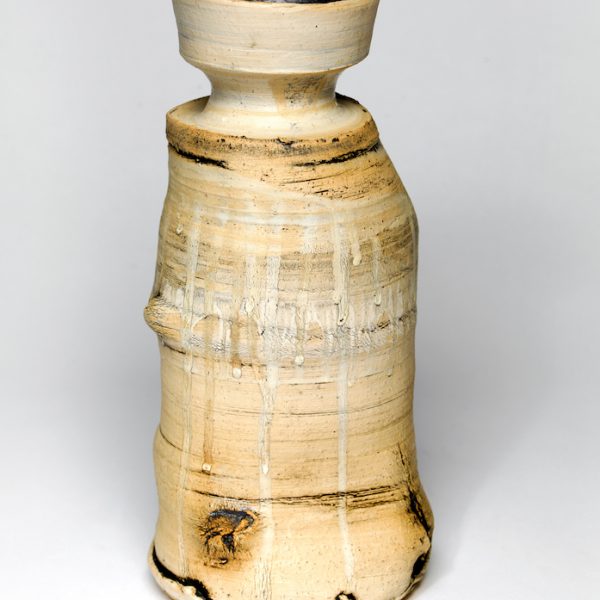 Additional Information
"The distorted pieces, both grooved and white, are wheel thrown and then forced dry using a blowtorch, artificially drying only a few millimetres of the exterior of the pot whilst the interior remains sodden and wet. Having thrown the form, body and neck, it is force dried and the neck cut off (whilst still on the wheel), this allows my hand access to the interior so that I can continue to throw the pot one handed, from the inside only, pushing out against the dried and no longer flexible exterior. This causes the exterior to crack and split, especially with the grooves, which are achieved using a fork as the wheel is spinning. After bisque firing the pots are stained with oxides and the surface wiped clean. This creates the contrast between the black trapped in the cracks and textures against the rest of the pot’s surface." Andrew Adair

I graduated from Glasgow School of Art in 1987 with a BA(Hons) Degree in Ceramics. From 1988-1993 I was a member of The Dalhousie Lane Potters’ Studios, Glasgow, before moving to Dumfries in 1994. I am currently based in the Kilncraft Studios at Gracefield Arts Centre, Dumfries.

I have been a practicing ceramic artist for over thirty years and have always tried to maintain a playful approach to clay, allowing the material to be evident through torn edges, cracks, texture and surface, enjoying the random, organic quality this brings. The work must always have integrity at its core and the material itself, be clearly manifest in the finished work. I enjoy making pots and “the potness of the pot”; something to be handled and appreciated, in a tactile sense, not just through an aesthetic eye. I remain fascinated by the same themes, the interplay between positive and negative space, the layering and distressing of surface, the unpredictable and the accidental. These are constants in my work.

As well as continuing to work with clay, I have, over the last few years, diversified into 2D Mixed Media, repurposing old metal shelves, wooden pallets, anything with an interesting surface that can be modified and developed. Techniques used in my ceramics, have themselves been repurposed and reused in the 2D works and then reworked back into 3D. The sense of play remains and continues to guide my process.

2015 Commissioned by Dumfries Academy to produce a large ceramic memorial wall plaque about the life of ex-pupil Jane Haining who died in Auschwitz. The plaque is on permanent display on the walls of Minerva Hall at Dumfries Academy.