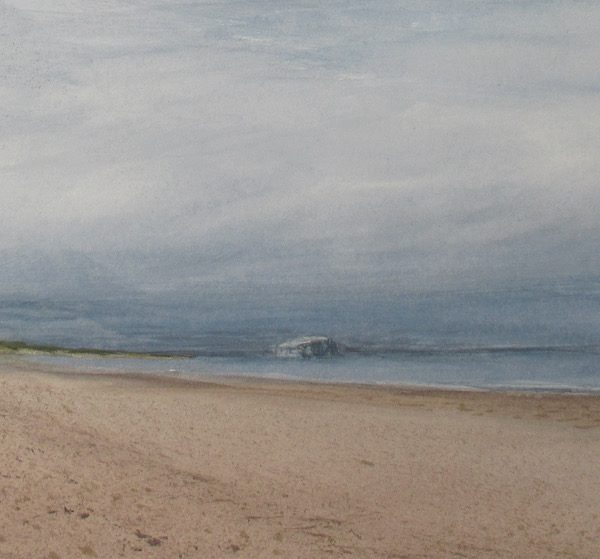 I am self-taught and have been painting watercolours since my late teens. I believe that a lifetime of painting is to be found within a few miles of one’s home. For me ‘home’ is the Mearns and my work is firmly ‘located’ in – and inspired by – this area.  I never tire of it – the long furrows, first light on the Grampians, the beauty of an Autumn day when the hearst is under way, the landscape in Spring when clouds move across the land under a constantly changing light. It’s a unique place – bound up as it is for me with so many memories.

For most of my career, I worked outside in the landscape itself & embraced the spontaneity which is, for me, the essence of working ‘on the spot’.  Watercolour responds in a uniquely sensitive way to the atmosphere in which the work is created. Working in the drying wind of a hot July day was quite different to painting in the dying light of a soft October afternoon as the haar drifted in from the sea over Garvock and into the Howe.  The rapidly changing light also forced me to work quickly - to take risks.

When I took early retirement from teaching in 2009 in order to paint and exhibit more widely, my working method changed and my work is now mostly studio-based.  I find I can explore aspects of the medium which were impossible when working with the various constraints of painting on the spot. Now, my watercolours are the product of a much slower process of development; they are less ‘spontaneous’ but, I hope, reflect similar preoccupations.  I now work from sketches & digital images which act as references and provide the material/ subject matter which compose the work.  But the real source is visual memory & my aim remains to get as close to the original experience of being in the landscape as I can.

For a work to be successful, I believe it must do more than replicate a scene or capture a moment in time in the way a photograph might; rather it must bear witness to the act of seeing and remain true to the impulse which gave rise to it. Above all, it must connect with the artist’s emotional response to the landscape. If it succeeds in this, then it will have made its mark.

Andrew Wyeth wrote: It’s the moment I’m after, a fleeting moment but not a frozen moment. My own work is an attempt to capture such moments – to create ‘reminders’, if you like – and to record and celebrate the natural beauty of the Mearns landscape and shoreline as it changes with the Seasons.

Nominated for membership of RSW Council (2019)

Works in the Collections of:

The Royal Bank of Scotland

The Town of Clermont-Ferrand, France & Private collections throughout the world