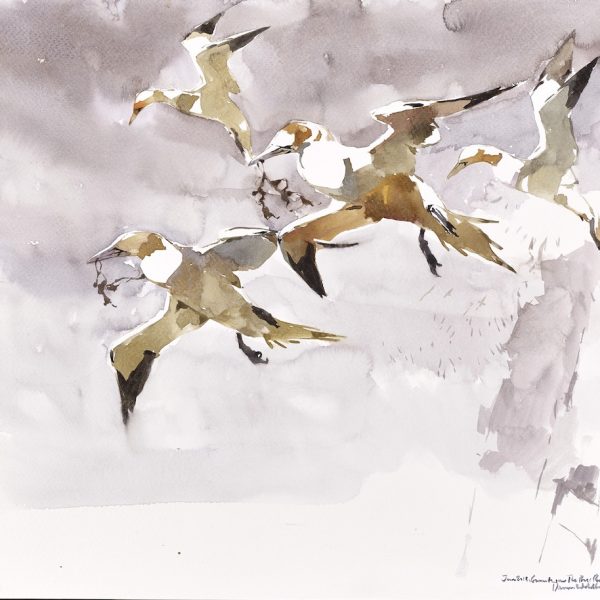 Darren Woodhead was born in West Yorkshire in 1971, but has lived in Scotland since 1996. He is a graduate of the Royal College of Art in London and a passionate, purist Watercolourist, all of his work is produced outside on location and drawn directly in brush. He has been a freelance Artist since leaving school, travelling and exhibiting widely.

Painting and Conservation drives Darren’s work, and he recently travelled to both Israel and Malta, raising over £23,000 in the process for this cause. Recently he was The Inner Forth Landscape Initiatives’s  (IFLI) Artist in Residence, documenting the wealth of natural history of the Upper Forth, working alongside the RSPB, local council’s and communities. During the last few year’s he has worked with Simon King the film maker, Chris Packham and is a very proud ambassador for Zeiss Sports Optics.

He has won many awards which have seen him invited onto expeditions with The Artists for Nature Foundation to India, Peru, Ecuador, Israel, Sark as well as Portugal and the Spanish Pyrenees. In 2016 he won the Undersea Art Award, awarded by The Wildlife Trusts, which has seen him beginning to pursue an ambition to work underwater with watercolour. The first results were exhibited at the Mall Galleries in London in October 2016, a ‘journey just beginning’. Further awards for his work include the St. Cuthberts Papermill Award and twice winning the prestigious Swarovski / Birdwatch magazine Artist of the Year, which was awarded at The Mall Galleries, London. His work is held in many public and private collections including a commission for The Duke of Edinburgh’s 90th Birthday.

He was invited to appear on Springwatch, demonstrating his painting techniques live on the BBC’s Unsprung show as well as being the ‘Artist In Residence’ for the following BBC Autumnwatch and Winterwatch programmes working and demonstrating live on BBC2, Internet and BBC Red Button. He was featured again in 2018. He has also appeared on the BBC’s Landward programme, as well as BBC Radio Scotland and STV.

He published his second solo book ‘Up River, The Song of the Esk’ bringing together three year’s work from an appointed Artist in Residence position in the Scottish Borders, has now sold out. His first solo book ‘From Dawn Till Dusk’ published by Langford Press in autumn 2005 celebrated the wealth of natural history found along the forth as well as the Lammermuir Hills and the west coast. He is an active member of The Society of Wildlife Artists, having served on their council in 2006/2007.

He currently combines his painting with occasional teaching at Loretto's School, Musselburgh as well as Edinburgh College of Art. He has led painting courses to North Norfolk, Orkney, arctic Norway and Sweden, ran Courses with Naturetrek and leads and tutors the Seabird Drawing Course based in East Lothian, formed by the late John Busby. This unique drawing/ painting course has taken place since the 1980’s and is fortunate to be able to take participants onto The Bass Rock, Fidra, the Isle of May as well as St Abbs and other coastal locations around the Firth of Forth during June/July.

Darren met his Artist wife Pascale Rentsch on The Bass Rock on a John Busby Seabird Drawing Course in the 1990’s, and the rock and the Gannets, mean a huge amount to him. He is driven to paint from life, to encourage and nurture enthusiasm through the experience, energy and freshness of first-hand observation and the connection then made to the natural world. He is passionate about the landscape and natural history of his adopted East Lothian.